I've looked into most of the popular freelance copywriting websites out there and found most of them to be pretty uninviting, mostly because the pay tends to be pretty appalling. Is this one any different? (Tweet This)

A few weeks back, though, I stumbled across a site called CopyShoppy, a former IndieGogo project, that intrigued me for a few reasons:

At first glance, this "gamification" of copywriting feels a little bit slimy. And I guess in a way the companies that participate in these contests are getting a lot of free work.

But the cash payouts are actually pretty decent compared to what I'm used to seeing around the web. As of this writing, there are 8 open contests on CopyShoppy with the following payouts: 130, 99, 99, 99, 201, 99, 120, 99. That's a healthy $118 average for what is (typically) just coming up with a winning slogan, tagline, or other piece of short copy.

Consider that the very first listing on my eLance page right now is advertising $20-70 ("depending on quality") for a 300-600 word article. And this is considered a decent rate over there. (This is some bullshit, but that's a whole separate issue that I'll be writing about soon.)

But hold on a second before you ditch my blog and open up a new tab so you can start raking in the dough. The premise of the site itself works, but you're a respectable writer... should you really be taking time away from your own projects to enter contests on CopyShoppy? (Tweet This)

If only there were someone who was willing to try it themselves first and report back.

When I stumbled across CopyShoppy, I was intrigued enough to give it a try. I spend so much of my time writing, anyway, I wasn't opposed to throwing my hat in the ring and trying to snag one of those juicy payouts.

Let's start with the ugly. 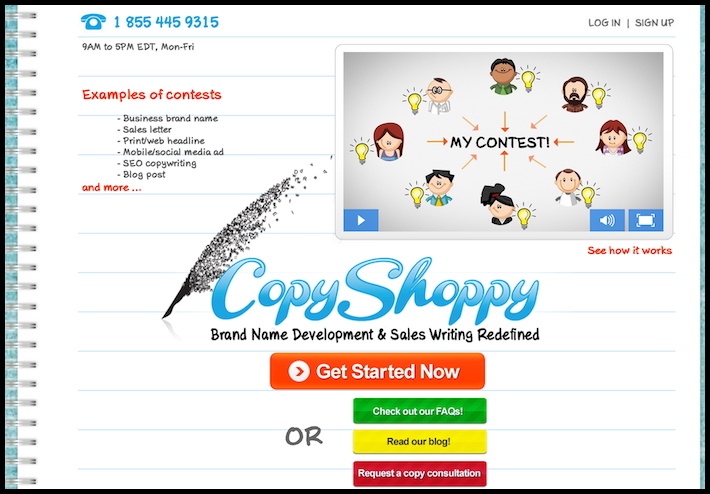 Yep. The site itself is absolutely hideous.

Frankly, it looks like a scam. At the very least, it doesn't look like a place where real money should be changing hands. And for some reason they've gone with something from the Comic Sans family as their font of choice. What's especially concerning is reading that the founder spent a year "fine-tuning the layout of the site."

That site. The same one you see above.

UPDATE: Okay, to be fair, they just updated the site as I was getting ready to publish this piece. Now the main landing page looks something like this: 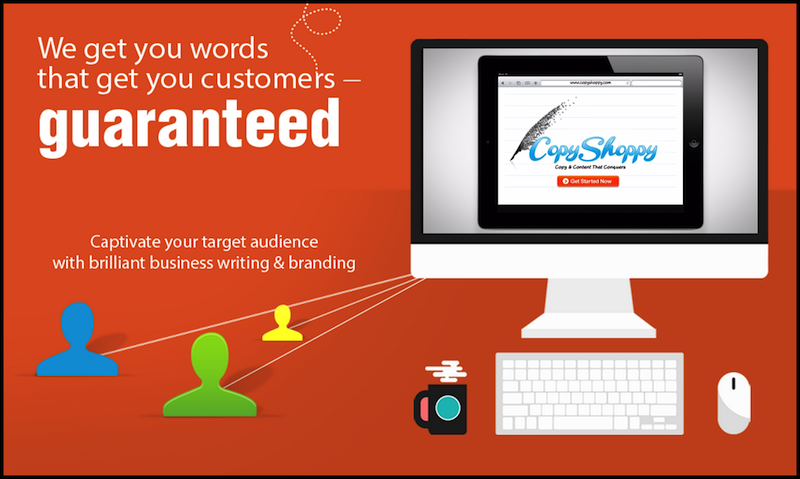 Better? Sure. But the rest of the site is still a mess. And it doesn't help that the copy editing throughout the site is a disaster. On a site that advertises "brilliant" copywriting.

So, yeah. It doesn't exactly inspire confidence upon your first visit.

When you dive a little deeper, you'll notice a pretty clunky interface. It's awfully difficult to navigate to and through the various contests hosted on the site. If you ever navigate away from the main "Contest Marketplace", you're going to be hard pressed to find it again (it took me a really long time to figure out that the "Browse" button takes you to the "Contest Marketplace").

But you're hungry. You have bills to pay. So you persevere and you find a contest you'd like to enter.

And then you run into more problems.

The first step to entering a contest on CopyShoppy is, naturally, to read the creative brief. That's important, and it was smart of the creator to include a spot for full briefs rather than letting the clients just write a short paragraph about what they were looking for.

Unfortunately, these briefs tend to be hugely unhelpful, for the most part. The companies are often vague about what exactly their product or service is -- many of the briefs are simply a repetition on the same elusive statement over and over (ie "Help us name our app that will do cool communications stuff!"). This would seem to be the clients' fault, but shouldn't there be some sort of quality control? The site has a Help article called, "Writing a Good Copy Brief", but unfortunately it's pretty useless.

Once you've soldiered through the brief, brainstormed some great ideas, and entered the contest, you're not entirely out of the woods yet. A few more drawbacks to consider:

Is there any Good left in the world?

We covered the Good in the beginning: the premise and the payouts.

Pretty much everything else about this site will need a major overhaul in order to attract writing talent and quality clients.

So I guess the question is, why did I go through all the trouble to write this up? Trust me, I'm not in the business of making unnecessary enemies or trashing people for sport. That's not my thing.

But I do believe that there's a shameful lack of quality outlets for writers out there. Especially good copywriters. Everyone expects great content to be free, to just magically flow from the fingertips of talented craftsman who want nothing more than to be heard.

So I respect the fact that CopyShoppy is doing something a little different and starting off with legit payouts. The "contest" angle may not be for everyone, but they seem to genuinely want to connect brands with writers who can help them, without setting up an open marketplace where the work will inevitably go to the lowest bidder.

The platform may have a long way to go, and a lot of kinks to work out, but it's worth keeping an eye on (Tweet This). And if you've got a few minutes to kill and want to take a stab at coming up with a name for the world's next great "communications" app, well, there are worse ways to spend your time.

You could be writing an article on plantar fasciitis for $5 an hour instead.

There are few things more aggravating than going to Google, searching for a topic, and finding all the top results to be articles from 2012 (except on the off chance that's actually what you were looking for). This is particularly frustrating for a copywriter

Whenever we intervew copywriters at work, I always like to ask about their creative process. But recently I've realized that I know very little about my own. So I decided to document my writing process as I was working on my latest essay, called