I just got done talking about a story I recently published, and how none of the bigger outlets I pitched were interested in running it. I talked about how I settled for publishing on Medium and was thrilled when 400 people read it.

Well, a few days ago, that story went "viral". We're not talking millions of hits -- but thousands, in a really short period of time, which is still pretty awesome in my mind.

I thought it might be interesting to look at the timeline and talk about how exactly this story "tipped". So here goes:

June 24: I publish The Man My Dad Was Supposed to Be on Medium.

June 24: I share it on Facebook where my friends and family show a ton of support -- Liking, Sharing, reading. There's a big initial burst of activity around the story. 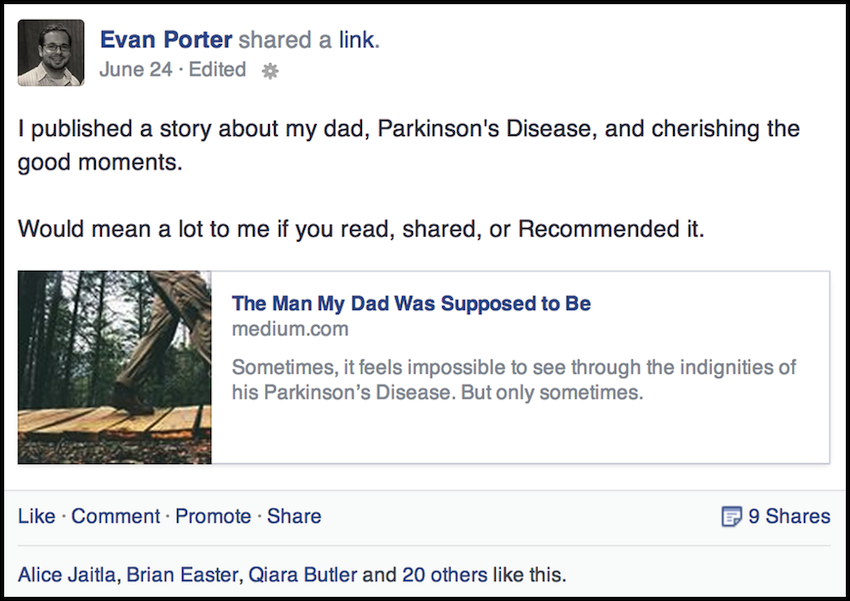 June 24: 250 people view the story, with about half of them reading it all the way through.

June 25: The story continues to make the rounds through my extended social network. 140 people view it this day with, again, about half of them reading all the way through.

June 26-27: Views drop to 90, then jump back up to 170 the next day, which I can't really explain. I think at this point some friends of friends of friends are still discovering the story on Facebook as it gets the odd new Like or Share. I've also shared it with some relevant interest groups and I think there's some delayed momentum from that. 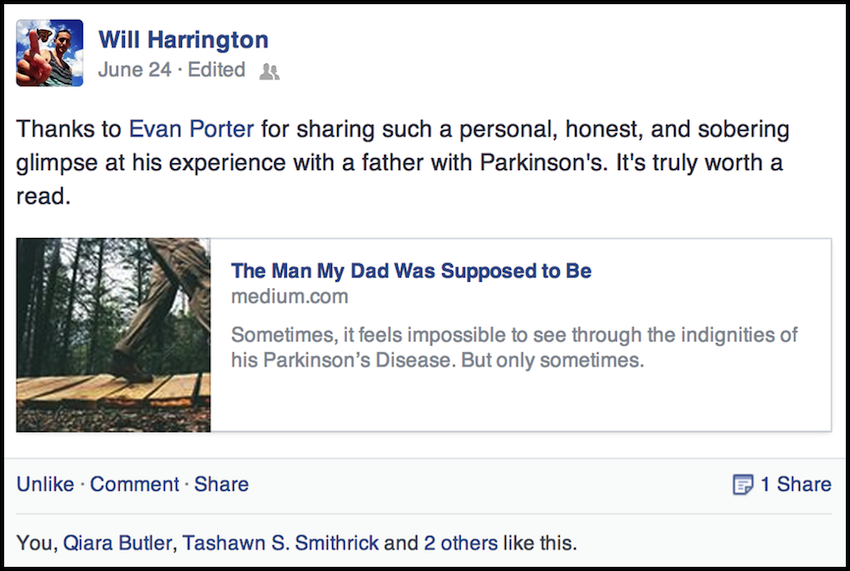 June 28: Total read count (people who have read the story from beginning to end -- this stat is one of the perks of using Medium) is 300. I post the story to my own Facebook again to thank everyone for rallying behind it. This exposes it to a new segment of my friends that hadn't seen it yet. Views jump up to 186. 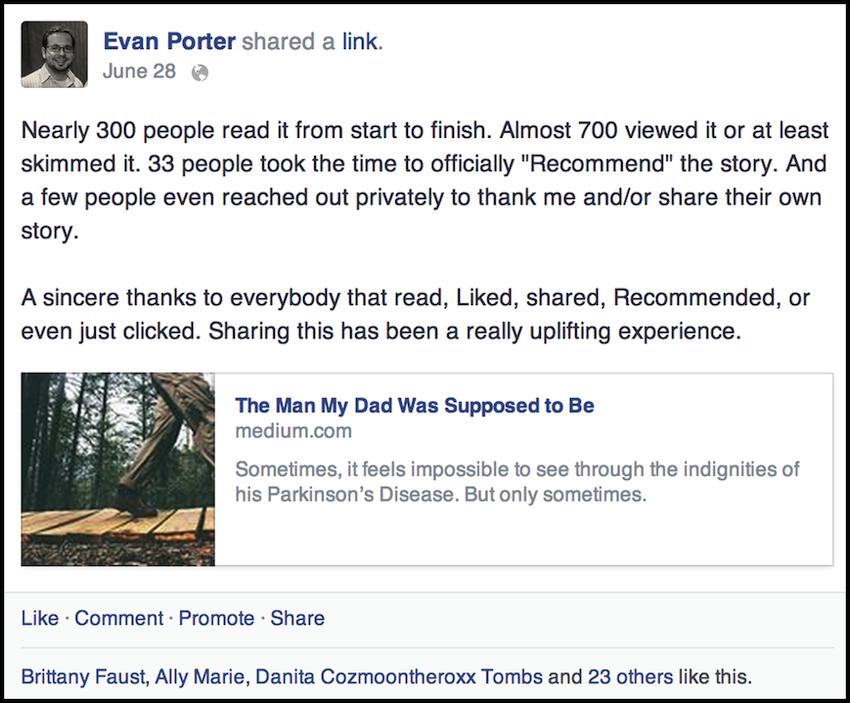 June 29 - July 14: Momentum slows to a trickle. The story continues to get a few views and reads a day, but its run appears to be pretty much finished. Total read count plateaus at around 400.

July 15: I get a notification that my story has been Recommended, which doesn't surprise me. Recommends have been trickling in, too. Slowly. (A Recommend on Medium is similar to a Facebook Like, but a little more meaningful. Think of it along the lines of a Retweet or a Share.) I check the notification and see that the Recommend is from a guy named Steve Rousseau -- who, from his Twitter profile, is an Associate Editor at Digg. I find this to be pretty interesting.

July 15: I don't really know how Steve came across my story -- maybe he was out hunting for good content, maybe he just happened upon it and liked it. Who knows. But even though he is in a cool position, I don't expect anything to come out of this. He doesn't have a ton of Twitter followers, so it's not as if he's going to share it with some huge, untapped audience. But... I'm about to be proved wrong.

July 15: I check my stats on Medium (which I do a lot, because I'm a crazy person) and I notice that the Views and Reads are climbing at a strangely high rate. Like I said -- this story was basically done. Tapped out. Over. But since Steve has seen it, it seems to have new life.

July 15: I check the Referral stats, which tell you where traffic to your story is coming from. And there's a new Referrer on there that I haven't seen before. Digg. I used to use Digg years ago, but don't remember much about it. All I remember is it being a platform where you can sort of recommend content for other people to find.

July 15: I go to Digg.com and, sure enough, there is my story... waaayyyy at the bottom of the page under a section called "Upcoming". I'm guessing Steve Rousseau put it there, or at least Submitted it objectively to their feed. Of course, I immediately unearth my old Digg login information and "digg" my story (again, sort of like a Facebook Like). I ask my wife to "digg" it as well, which is enough to vault my story to the top of the Upcoming section.

July 15: It's late at night, and at this point the Views and Reads are pouring in. But again, I don't expect much. All I have is a little blurb at the very bottom of Digg's homepage, and am probably only a few hours from getting bumped off entirely and fading back into obscurity. I fall asleep.

July 16: I wake up and, with sleep still in my eyes, check my Medium stats (of course I do). And I'm stunned. My story has gone from 400 reads to 1.4K overnight. And, much to my surprise, my story has climbed out of the Upcoming section and is now one of the dozen or so Featured stories on Digg's homepage. It even has a snappy headline that one of their copywriters wrote specifically for my work. 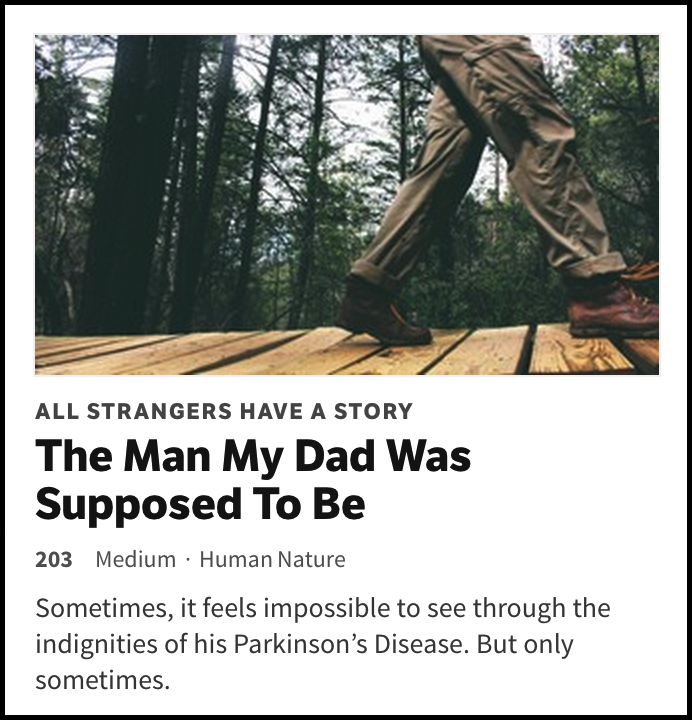 July 16: Throughout the day, traffic to the story continues to skyrocket. I check the Referrals and see readers coming in through viral aggregators like Pop URLs and FreshVirals.

July 16: People are sharing it on Twitter. I even get a few incredibly nice emails from strangers that read my story and felt a connection with it.

One's throat is be-lumped: "The Man My Dad Was Supposed to Be" -- hard loveliness at @Medium https://t.co/8dg4a3ogWn

This is beautiful and heartbreaking and terrifying. https://t.co/M4ygU9gZuM

July 17+: By the end of the day, just as fast as it appeared, my story is off of Digg entirely -- that's how the Internet works. Always new content to be seen. After this huge surge, traffic dies down to a trickle again (though a much faster trickle... people are still finding the story through Digg and other random places it may have been linked). All told, the story was seen by over 5000 people and read by about 2000. Wow.

This is the traffic chart from the time I published the story, up until right now:

What Did I Learn?

It Only Takes One

It all seems so coincidental, that someone associated with Digg would stumble upon my story, like it, share it, and ultimately cause it to take off. Steve Rousseau could have just as easily not seen it. Or not liked it. And I'd still be sitting here at 400 reads instead of 2000. One person was the difference. (Thanks, Steve!)

The Lesson: It's probably worth cultivating relationships with influential people before you need them. I am, admittedly, not very good at this, but there's definitely value in not leaving things up to chance. Find people involved in places you might want to publish or be seen -- and not necessarily the Editor in Chief or President or someone that probably has thousands of people clamoring for their attention. This guy Steve has 233 Twitter followers, but is almost solely responsible for getting my work in front of 5000 people.

Viral Comes in Many Shapes & Sizes

The funny thing about my story is that it wasn't designed to go viral. At all. It's not about "lifehacks". It's not a list. It's not controversial.

The Lesson: Don't get discouraged by sites like Buzzfeed and Upworthy and Thought Catalog taking over the world. There's still a big audience for great, long form stories that don't lean on gifs, pictures, or numbered bullets.

The other funny thing -- there's nothing lasting about a big hit like this. It's just a one time thing. Sure, a few more people than normal clicked through to my website and poked around. And yeah, the whole experience was intoxicating in a lot of ways. But it's over now, and my writing career is basically in the same place it was before.

The Lesson: Impact is still more important than reach. What I'll remember about all of this is the Tweets and emails I got from people that connected with my work. The inflated numbers are fun, but they're not what really matters.

In general, I think trying to cook up a recipe for viral content is a waste of time. But it sure is fun to think about all the dominoes that have to fall into place for a story to really take off.

How to Deal with Rejection

Here's one for the bloggers out there. If you're serious about building a platform and an audience, you need to have Google Analytics installed on your blog. (Here's how). From there, you need to be looking at how many people are visiting your site,

I’m not an unreasonable person, but I can only be pushed so far. You know you’ve really pissed me off when I take to the written word to express my frustrations. When my wife and I first moved to Atlanta, we decided