Here’s is a quick commentary I wrote on the Ray Rice assault accusations and, in a broader sense, what it’s like being a fan when something like this happens (Baltimore fans know a few things about sports icons getting in trouble with the law). For those that don’t know, Ravens running back Ray Rice was arrested on February 15 for allegedly assaulting his fiancee. Reports stated that he knocked her unconscious. On February 19, a surveillance video came out that appeared to show him carrying her unconscious body out of an elevator. His lawyers stated that the facts will exonerate him. 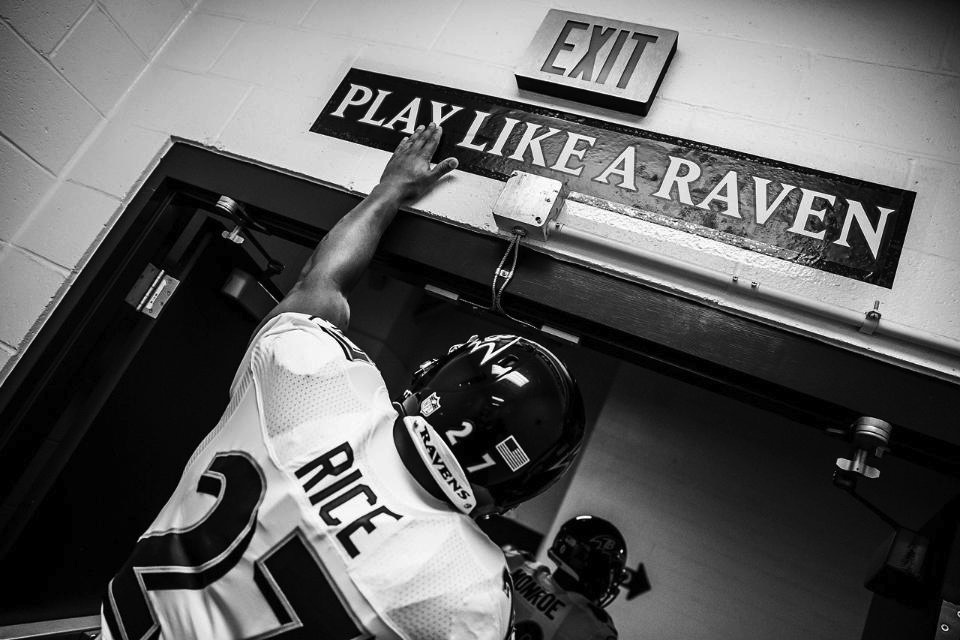 Let’s just be honest. The surveillance video that came out today on TMZ kind of makes it look, in pretty plain terms, like Ray Rice punched his fiancee in the face and then dragged her off an elevator. The police report and witness statements would seem to corroborate this.

But we don’t know for sure. Any number of things could have happened in that elevator, and we won’t know the full story until we see the rest of the surveillance video.

In the meantime, I’ve seen a lot of different reactions to this around the web. Many are ready to vilify Ray. To lock him up and throw away the key. But in Baltimore, a lot of people are taking a different stance.

But holding out hope of Ray Rice’s innocence, even in the face of the video and the police report, is fine by me.

I’m a fan. It’s not my job to be unbiased. It’s my job to love and appreciate the athletes I root for. And as a fan in Baltimore, I know Ray Rice pretty well. At least through the lens of what I see in the media and on game days. I’ve never had a beer with him or been invited over to meet his family, but I’ve had a front row seat for how he’s conducted himself as one of the faces of our franchise and city. I’ve had a front row seat for the amazing work he’s done in the community over the years.

For me, he has built up a certain amount of moral capital. And maybe we all value that a little differently, but for me, he has earned a certain amount of trust. Sure, things do not look good for him right now. They look pretty bad, actually. But his lawyer says this is a misunderstanding and that the second video will clear some things up. I’m not going to say I’ll blindly believe that, but I’m perfectly willing to delay judgment until the facts come out. Not because I desperately want Ray back on the field in 2014 or because I want to spare Baltimore the humiliation or because I won’t know what to do with my #27 jersey — but because this one incident serves as an extreme contradiction to everything he’s ever showed us. He’s always carried himself with integrity and gone above and beyond the call of his duties as a role model in the community. If he’s guilty, he’s guilty, but in my eyes, right now, he’s only accused.

It’s funny, if someone were to accuse your brother or father or best friend of something like this, what would you do? You’d stand by their side. Of course you would. You’d say, I know what kind of a person he is. He wouldn’t do something like this. He’s better than this. Even if you had a sick feeling in your stomach that they were really guilty, you’d be there to defend them until all the facts came out.

And if they turned out to be guilty, you’d say, I’m extremely disappointed. And he deserves every bit of punishment he’s going to get. But I still believe that he’s better than he showed here. He’s still a good person.

So, I’m not sure why we have to apologize for loving and believing in professional athletes. People like to shit on sports fans in times like these. Oh, it’s just football. It’s just a sport. Think about what’s really important here. Well, you know what? I think it’s important when a guy works his ass off to make his city proud, or when he stands up for bullied kids, or when he takes more time than he’s required to sign autographs and do appearances because he knows he’s a hero to a lot of people around here. You can say it’s just sports, but sports touches a lot of people really deeply. And in that context, Ray Rice has done a lot of good in his young life.

If he’s guilty, he’s guilty. He’ll deserve everything that’s coming to him — the fines, the jail time, the negative PR. But I’m not going to assume anything before we know the rest of the story.

If that makes me biased, I guess I’m okay with that.

Photo courtesy of The Baltimore Ravens

“Ugh, I should write.” I say that to myself all the time, and as someone who writes in marketing for a living then comes home and has screenplays, a blog, and other projects to work on… I really should be writing. Like, all the