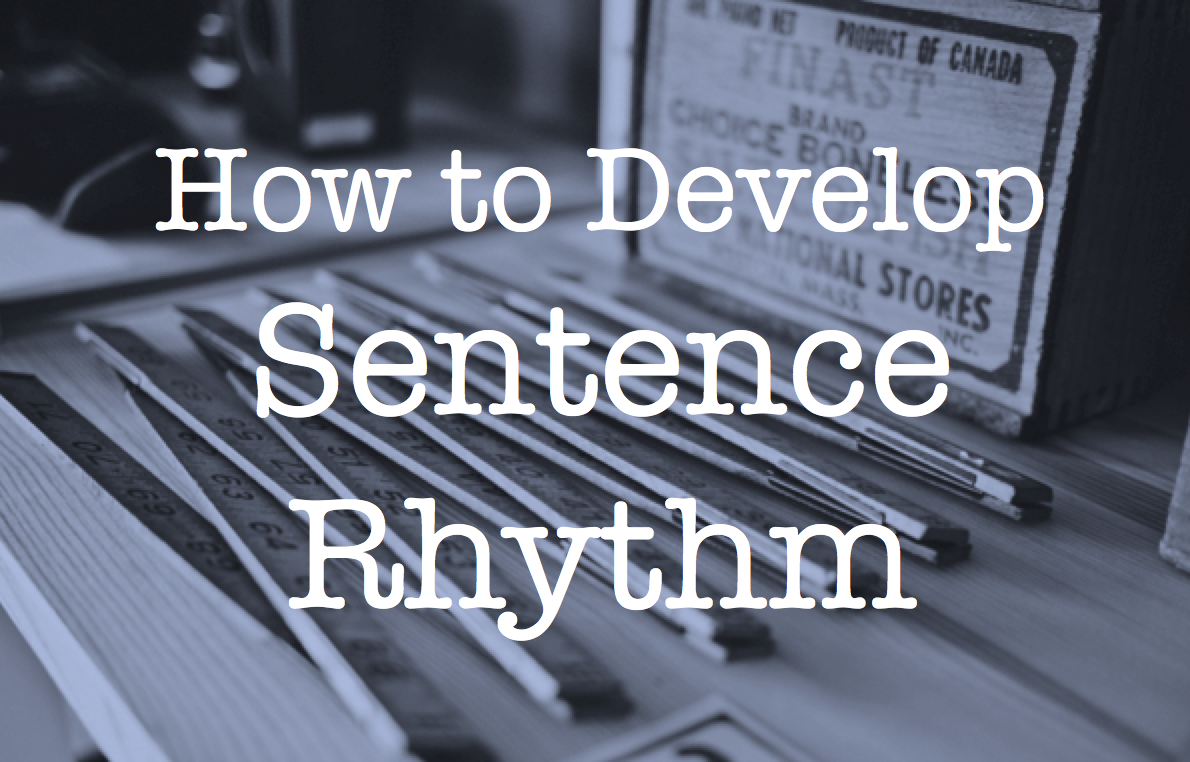 You ever read a piece of writing and notice that something just feels... off? Unnatural? Labored, even?

You can't put your finger on it. The ideas all make sense. The grammar is spot on. All the elements are there. But you still come away feeling like something was missing.

Well, a lot of the time, that something is sentence rhythm.

In short, sentence rhythm is a way of describing how effectively a writer mixes short, long, and medium sentences -- in other words, sentence variety. Doing this well takes a keen ear and a lot of practice.

But it can make all the difference in your writing.

Here are some tips on how to recognize and utilize sentence rhythm in your own writing. These are NOT hard and fast rules, though! Just little things I've picked up here and there that can really smooth the bumps out of your work.

Give them a try. And let me know how it goes.

When to Use Long Sentences

In general, longer sentences are needed to express complex ideas or describe multi-step events. They're also really great for setting the scene for the reader, painting the landscape around your writing, and piquing curiosity.

A simple experience that opened my eyes to new possibilities took the form of a 170px smiley face.

Not a complicated sentence, but there's a lot there. See how it leaves us wanting to know more about the 170px smiley face? And these "new possibilities"?

Using a long sentence as a wrap up or end point is harder but, with a little nuance (and a heavy emphasis on theme or imagery), can be extremely effective.

Here's the last line from Joseph Conrad's Heart of Darkness:

The offing was barred by a black bank of clouds, and the tranquil waterway
leading to the uttermost ends of the earth flowed sombre under an overcast sky - seemed to lead into the heart of an immense darkness.

When to Use Short Sentences

Short sentences pack a wallop when used correctly. They're best used to begin and end paragraphs, or even entire stories.

Try this on for size: the first sentence from another top Medium story; 2014 - The Year in Garage

Boom. Welcome to the article.

Short sentences can also make for fantastic endings, especially when used as a call to action, or a quick thought that reframes everything you just read.

Here's the last sentence of a terrific essay, The Night I Was Followed by a Guy Who Wouldn't Hear the Word No (along with the previous sentence for context):

Someday I will feel ready, because I’m still the same walk-like-you-mean-it woman — just not now. Not today.

That's the power of a short sentence well-wielded.

Short sentences, as mentioned above, can be used like a suckerpunch in writing. One interesting way to use short sentences, other than as beginnings or endings, is to immediately flip the reader's perspective at the back of an open-ended idea. Here's an example from writer Amy Tan (credit: Writer's Relief):

That night I sat on Tyan-yu’s bed and waited for him to touch me. But he didn’t.

A short sentence after a long sentence can also be used as a punctuation of the ideas that came before. For example, from F. Scott Fitzgerald's This Side of Paradise (credit: Virginia Tufte):

The silence of the theater behind him ended with a curious snapping sound, followed by the heavy roaring of a rising crowd and the interlaced clatter of many voices. The matinee was over.

Like you might expect, reversing the examples above reverses the result. Starting with a short, punchy sentence can jar or surprise the reader, or help them refocus on the main narrative. Follow it up with a longer, fuller sentence to add context.

Gonzales was easy to find. On the arrest report, he was identified as being an officer from Albuquerque, and he was still with that department in the fall of 2008.

The Rule of Threes

Repeating sentences of similar length for effect -- usually short sentences -- can be really powerful. But this technique works best when done in threes, followed by a longer sentence that adds context.

Here's a made up example:

Trees are tall. They're green. They're beautiful. And they're disappearing faster than many of us realize.

Trees are tall. They're green. They're beautiful. They're alive. And they're endangered.

Nothing wrong with the latter. But the "endangered" part doesn't have nearly the impact it should, because of poor construction.

There's something about the number three -- our minds expect to reach a conclusion or turning point after the third beat.

Putting It All Together

It takes a lot of practice to get a hold of sentence rhythm. The best things you can do in the meantime? Write and read. A lot. Start to absorb how really talented writers structure their work. And try putting what you've learned into practice.

Some very general tips to help you along the way:

Vary sentence lengths throughout your writing.

Too many short sentences lowers the reading level to the point where the reader may lose faith in you. Too many long sentences makes it sound like you've written a textbook.

Don't be predictable with how you utilize that variation, though. Starting and ending each paragraph with a short, powerful sentence, for example, can get extremely stale and repetitive.

Ignore the temptation of symmetry.

You don't need to "build" to long sentences with a series of short and medium ones. Your paragraphs don't need to look like a bell curve. Remember how short sentences are used to either punctuate or completely undercut what comes before? And how long sentences can add context to short hooks? Do that. Keep us on our toes. Describe in great detail the rug under our feet, then rip it away. Create drama with your sentence structure.

If you know of any great examples of sentence rhythm in action, please share in the comments -- I'd love to take a look.

Good news, everyone! I can now officially share that my debut novel DAD CAMP is getting published! It's slated to
Nov 16, 2022
14 min read
Feb
19

Every so often, I run into these long lists of writing tips and quotes from famous authors on sites like
Feb 19, 2015
11 min read
Jan
23

What I Learned From Writing for The Onion (For a Month)

In April/May of 2010, I spent four weeks as a freelance writer for The Onion News Network. Besides looking
Jan 23, 2015
6 min read